A Hall of Fame Induction Isn’t Slowing Down Hayley Wickenheiser.
The Canadian hockey legend on Monday will become the seventh woman to join the Hockey Hall of Fame. Still, she has stayed busy as a Maple Leafs executive and medical student.

By Curtis Rush
Nov. 18, 2019
TORONTO — On Friday morning, before attending a ceremony to receive her Hockey Hall of Fame ring in advance of her induction on Monday. Hayley Wickenheiser was getting in an hour of study as part of her medical training to be an emergency room doctor.

In June, when Hall’s chairman, Lanny McDonald, called to inform her that she had been elected in her first year of eligibility, Wickenheiser was sitting down for a medical exam at the University of Calgary. 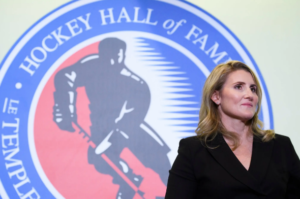 But the 41-year-old Wickenheiser has not slowed down. She is balancing her studies with her responsibilities in the Leafs’ front office while working with junior players in the Western Hockey League.